Himachal Pradesh, as is given the sobriquet – Devbhoomi – the Land of Gods, has its nook and corner brimming with temples. A unique feature which one can observe all over the state is that people aligned to certain deities, symbolically express their devotion in calligraphy, in respect of their deity. For example, one can observe on vehicles, be it trucks, or vehicles (personal or government), inscriptions like: Jai Maa…, Jai Devta….

Most of the transport buses belonging to Rohru region and vehicles of owners from Rohru/Jubbal/Kotkhai have ‘Jai Maa Hateshwari‘ marked on them. Similarly, areas adjoining Shimla like Bharari, Poabo, Kuftha Dhar, and Dudhli, that fall under the domain of Maa Padhai (Kali Mata) have their distinct devotion depicted on the vehicles there. 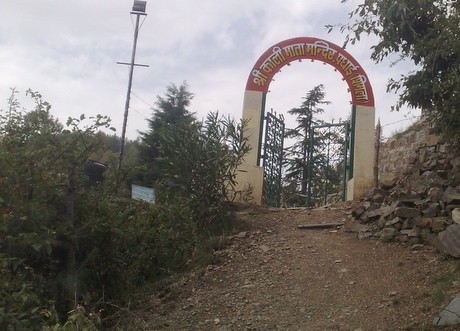 The temple of Maa Padhai is around four and half kilometres from the main town of Shimla.  Buses and taxis keep plying regularly on the Shimla-Bharari-Poabo route. Vehicles would drop one next to Dudhli village, then a walk on a trail surrounded by deodar forests of about half a kilometre leads to the temple. Though there is a kachcha road connecting the temple, on which vehicles keep plying off and on, but a walk would definitely be the best option if one wants to enjoy the company of the woods.

Though the boards and hoardings tucked all over the places surrounding the temple claim that it is an ancient and historical temple, but it is in fact, a newly constructed one, built in mid ’80s. The temple of Maa Padhai is located on top of a hillock, surrounded by temples of other Hindu deities like Lord Shiva, Lord Satya Narayana, Lord Hanumana and other deities. Temples dedicated to others deities are still under construction. 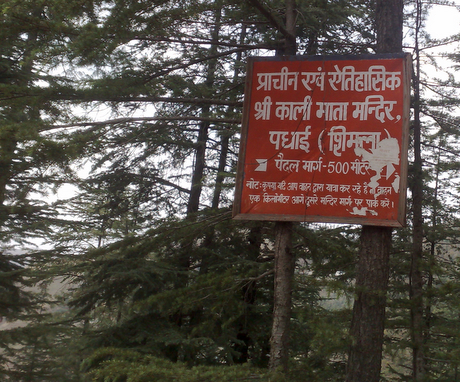 The most beautiful aspect of the location of the temple is that one can have views of areas adjoining to Shimla from this point. One can observe locations like Summerhill, Annadale, from one point, and from the other side, areas like Sanjauli, Mashobra, Craignano can be observed.

The location of Maa Padhai offers plethora of dimensions, it is an ideal place to venture out for a trek, a very good picnic spot to freak out from the city buzz with family and friends, a very serene place to be with nature and be with oneself and observe nature at its bounty and obviously it is an appropriate location to revere Maa Kali and thus be blessed by Maa Padhai. So Shimlaites and everyone coming to Shimla take out some time to visit the place and enjoy yourself.