Dharamshala (June 19): Sudhir Solanki had come to Dharamshala all the way from Gujarat, having been told about the beauty of the place – the lofty mountains, thick cedar forests, spirituality of the lamas, and also the mystic Dal lake, among other thing. He enjoyed everything around but is yet to find the lake. And that’s because the lake has actually vanished, and that too within a short span of three years. Climate chance certainly cannot show its adverse effects this fast, and therefore the only other force that could have done it is the government’s indifference. Incomplete renovation work, which started three years back, has left the lake completely dry for this long period and affected the tourist flow to the place, besides affecting catchment areas. As a result, local public is now up in arms against the administration for having destroyed the lake in the name of renovating it. 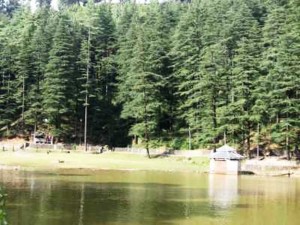 The lake as it was earlier

At present the lake is totally swallowed by heavy load of slit and has turned into a meadow. The government had been promising desiltation of lake for a long time and many plans were proposed and discussed on how to save it from siltation. The desiltation finally started in May 2008 under MNREGA, and thereafter the district administration took over the project.

Once known as ‘Chota-Manimhesh’, situated at the height of 1,775m above sea level in a cool ambiance, which is a 11 Km drive from Dharamshala, it was the best base camp for trekkers, but today no such activity is visible. Lack of planning and vision has led to the lake losing its age-old charm. Pradhan of Naddi village under which the lake falls, SD Thapa said that they would be submitting a memorandum to the government through the DC for non-completion of the work. He alleged that the administration was not interested in completing the job as the deadline was set for June 2010, but there is hardly any work visible. 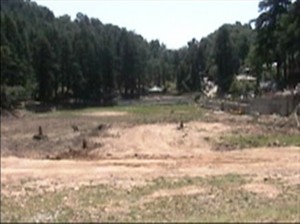 The current status of the lake

He said that it is obvious that the work will not be completed this year too, because the rainy season has already started here and the work done in the dry months will go waste. De-siltation work of the lake has affected the tourist inflow to the area, which has led the tough survival for the hoteliers and taxi operators in the area. Taxi operator Ashok Kumar said that it has become difficult for them to make both ends meet and government should take necessary steps to complete the work as early as possible.

However, deputy commissioner, Kangra, RS Gupta said they had prepared a project report under which de-siltation work was going on and a parking place would be constructed outside the lake for which 18 lakh had already been invested. A project of Rs 70 lakh has also been sanctioned to plug leakage of water. “We have also diverted MREGA funds to reconstruct the lake and are trying to complete this work this year itself,” he said.

He further added that in 2009 the outflow of water was more than inflow, which led to the lake drying up. “Fishes from the lake have already been transferred to other places due to the shortage of the water in the lake,” he disclosed. But the DC, of course, had no answer as to why it is taking so long to put the lake back in its past glory.