Almora, Uttarakhand: When I packed my sleeping bag that early morning before sunrise for this long journey, I placed a white (khatak) scarf at the altar of His Holiness and said I have decided, whatever happens, I will make my way through.  Walking for almost 70 with 300 people covering more than 900 kilometres through Himachal, Punjab, Haryana, Delhi, UP, we reached Almora town yesterday in the Kumaon Mountains in the north Indian state of Uttrakhand.  From here Tibet is not very far. 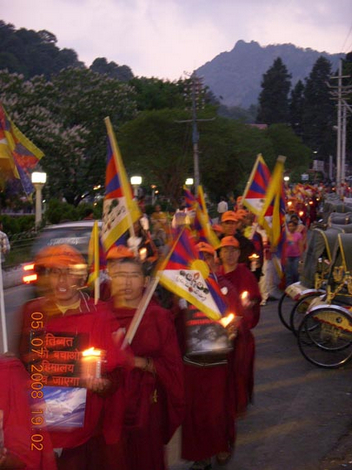 Tibetan marchers on a night vigil, in Nainital, Uttarakhand

The March to Tibet began from Dharamsala on 10th March, the same day similar uprisings happened all around the world, organized by Tibetans and Tibet supporters, even in Tibet — a global Tibetan uprising. We started with 100 core marchers, on our way many more joined us. As we leave Almora tomorrow into the high mountain valleys towards Tibet, we are 300 marchers and eight support marchers who are foreigners from different countries, some of whom have been with us from Dharamsala.

All along the route the Indian people have welcomed us with warmth, cheered our spirit and in some places offered us water and shelter. At most places we spent our nights in Ashrams, Gurudwaras and schools, sometimes on empty grounds on the roadside, where the local municipality provided water in tankers driven by tractors. Indians have a culture of going for long journeys across their country for pilgrimages and therefore hospitality is a natural custom. The police have been sending an escort all along the route in jeeps or on motorbikes passing the security duty from one district to the next.

You must be aware that we were arrested by Indian police in Kangra District on the 13th March and jailed us for 14 days. The second batch of the March was launched three days later and that carried on the March spirit. After our release, all 100 of us rejoined the March, but there is already a court case slapped on us. At the end of the last month, Choeying, Lobsang Yeshi and I had to appear in Dehra court and will have to do that again in June.

I learned that some people had the impression from various media reports that the March had been canceled. I myself received phone calls from few people whose doubts I cleared. Seeing an imminent confrontation at the border, His Holiness did advise the organizers against the continuation of the March, but after seeing the courageous non-violent uprisings that happened all over Tibet and the ongoing Chinese crackdown on our people in Tibet, our commitment was revitalized by their sacrifice and inspired us.  Now we can’t stop it. So we re-launched the March to Tibet from Delhi on the 19th April after a temporary halt. 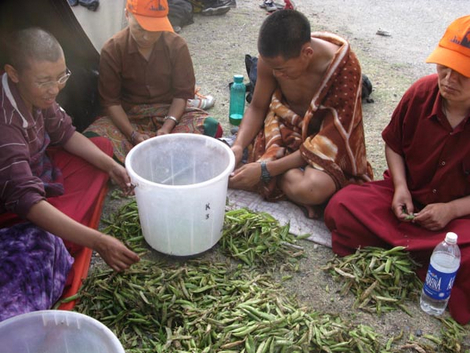 The journey from Delhi passing through UP was difficult; it was extremely hot, dry and dusty. The trucks and buses on the highway threatened to run over us sometimes rushing by our ears, and sometimes stopping by to pick our campaign flyers that we were handing out on the road. As we walked one after the other in a long single file like the multiple legs of a millipede — one long body. Even when the head has taken the next turn, the tail is still trailing behind from the last corner.

The Marchers wake up at 4 am, after washing and packing sleeping bags, tents and mattresses, we have breakfast and start walking at 5 am. Usually walking for 6 to 7 hours a day we cover a distance of 20-25 kilometers, sometimes walking even 27 or 28 kilometers. The logistics and kitchen team move ahead in trucks and set up the camp. At many places water is luxury. We bathe under hand-pump water taps on the roadsides; scores of monks bathe together sometimes in wheat fields. It’s a great experience answering nature’s calls in open fields under the moonlight with a jug of water by your side.

Most of the marchers are Buddhist monks from the three monastic universities in south India; some old people who escaped from Tibet along with His Holiness the Dalai Lama in 1959, the eldest one being 78. The youngest are two 17-year-old boys, born and brought up in India and have never seen Tibet. There are several young mothers who left behind their family in the care of their husbands. Our communication team tries to reach out to the outside world and also arranges opportunities to talk to local media. During the evening gatherings, after the daily prayer, the media coordinator tells the news. Many times the Marchers applaud Tibet support actions taken in different parts of India and abroad. The protest against the torch in London, Paris, San Francisco, Canberra and Tokyo received huge appreciation.  The ongoing Tibetan protests in Kathmandu are highly appreciated understanding Nepalese police brutality.

We are now starting the last leg of the March. From Almora to the border is now barely 200 kilometers, and it will now be cold as we ascend higher into the Himalayas. I know returning to a homeland that is still under foreign occupation is not easy. Chinese military will of course guard the border with machine guns, even Indian police will find an excuse to stop us.  Confrontation is inevitable, but we are not stopping. We may even have to camp at the border for a long time, might have to call for international support and participation. We march into uncertainty. 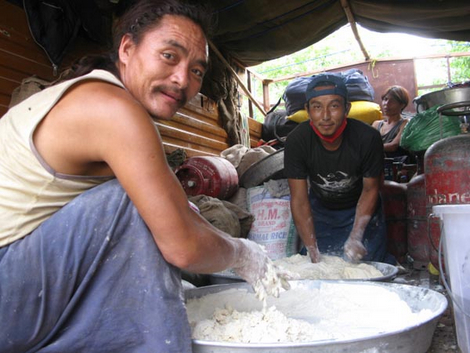 After the Peas, it’s time for the dough, Nainital, Uttarakhand

The March to Tibet is a process for us to return to our homeland and reclaim our right to be in our native land in freedom. Whatever happens, we have deep commitment to non-violence; we will not retaliate. We may be beaten, jailed or even shot at, but we are not giving up. And for me there is no other plan in life other than this March. For all of us marchers, this is our life commitment.

If you are far away or can’t join us, you can help spread the word. Donations of sleeping bags, shoes and mattresses can be of great use. Your financial contribution can help feed the Marchers and give water to keep us going. I count for every Tibetan’s contribution towards this movement.