Shimla: Khali’s journey from Sirmaur to Atlanta where he is currently based is well known to everyone. He is a big star today, and the media has spent reams of paper on him. Luckily being a Shimlaiite, I have had the fortune to see him closely and be around this giant man, who, even then was extraordinary, but still an ordinary man. 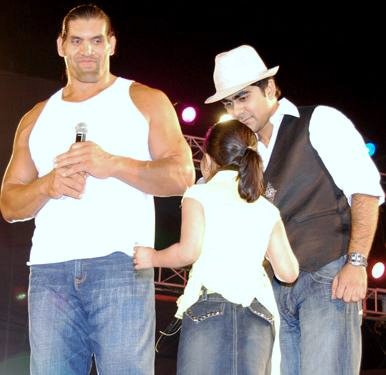 Whenever any news channel shows a feature on his past life, of days when he was just Dalip Singh Rana – a man from an extremely poor family, with an extraordinary physique, leading an ordinary life in a small village of Sirmaur – it always reminds me of the days, when he used to be a watchman of a small Chinese dhaba in Shimla. The dhaba is close to my house.

Being a watchman was one of his many odd jobs, which he did in his life, before he became the WWE champion. He used to sit outside that dhaba on a chair and no passer-by could ever resist taking a look at him and that amazed reaction on their face seeing that giant figure was inevitable.

He often used to become a source of free show, and mockery for many, but I never saw him showing any distress or irritation. All children of the locality, including me, thought of him as a ferocious giant who had no emotions. Even as we played pranks on him and irritated him, he never ever responded with anguish. He used be our favourite pastime post school, but I really don’t remember him talking much.

I regret now, when I realise that he wasn’t a ferocious emotionless giant, but a large hearted man who had accepted very bravely his being different from the ordinary and normal. It didn’t mean that he had no sufferings or feelings. I am sure, he always had a tough time, procuring even a sufficient two-time meal for himself from his petty earnings.

Now when I see him working his strength and power in fighting the world’s heavyweight champions, I can’t resist remembering the irony when I used to see him loading and unloading cargo from trucks, his another odd job at that time. I wonder, why people couldn’t think him worth much better than a coolie. That time too, people looked up to him, unfortunately not out of admiration but out of surprise.

Great business tycoons of India are eager to shell out billions on this champion who once strived for a petty permanent job. Now we are so proud of this first Indian Champ at WWE who gets a gala welcome on his return to the country, who once was believed to be no better than a coolie or a watchman. The HP government too is also all set to honour “The Great Khali” primarily for his achievements in WWE, but moreover, perhaps also in the hope that he would act as the international brand ambassador of the state.

Khali has indeed captivated the media attention of India and enjoys even a bigger fan following both in India as well as abroad, which is totally beyond his imaginations.

Well I guess this is the fate of every great personality. They have to pass through many difficulties before they climb the peaks. I am especially proud to have known and seen a fraction of his great persona.