Baddi (May 10): Inaugurating a half-ready project is increasingly becoming a norm these days for the politicians. The latest such instance was visible today at the inauguration of Employees State Insurance Corporation’s (ESIC) first model hospital at Baddi on Monday by Union minister for labour and employment Mallikarjun Kharge. 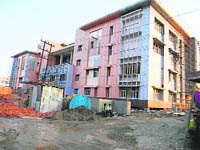 proposed 5 floors of the hospital is ready and beneficiaries from the 5000-odd industrial belt of Baddi-Barotiwala-Nalagarh belt will have to wait for indefinite time to avail medical services from this hospital. In June 2008 when the foundation stone for this 100-bedded hospital was laid by then labour minister Oscar Fernandez, it was declared that the hospital would be ready in just 18 months.

Now even after 36 months, only one floor is ready and no useful facilities are being offered. Authorities of ESIC, for reasons best known to them, preferred to organize an inauguration function rather then to complete the hospital. It may be noted that this industrial belt has more than 1 lakh factory workers (highest in Himachal). It is ESIC’s policy to have a 50-bed model hospital where the number of insured persons under ESIC scheme is more than 50,000.

This ESIC hospital will primarily serve factory workers across the industrial belt, wherein they will be able to get cashless medical services against their ESI accounts. Budget for completing the hospital will obviously get doubled in this period and all this extra money will go from hard earned contribution of laborers held with ESIC.

IN the last 36 months, only one floor could be completed. No doubt, for the purpose of inauguration there were few things to show off but if we see the 2008 plan, very little has been completed on the ground. It was declared that this 100-bedded hospital will house a staff of about 200-250 people including 19 specialists, 38 medical officers and 10 resident doctors. Now, it is clear that in only one floor what facility will be given to laborers and of what purpose today’s inauguration was. Hope authorities will awake and thousands of factory workers and their family members would get what they were promised way back in 2006.