HimVani Celebrating Life in the Mountains
Home Politics We would encourage village based industries: Dhumal

BJP’S come back to power with a thumping majority at its own in the vibrant leadership of Prof. Prem Kumar Dhumal has created history in Himachal Pradesh. Earlier, this party managed to form government twice, but only with the support of coalition partners. Prof. Dhumal took over as Chief Minister for the second time on December 30, 2007. He had led the government very successfully from 1998 to 2003 earlier, and is still remembered for his vision and the development of this hill state. Born to Capt. Mahant Ram, a farmer with a humble background, on April 10, 1944, in village Samirpur of District Hamirpur (HP), Prof. Dhumal took his higher education in Punjab and also taught there for ten long years. He was elected as MP (Lok Sabha) from Hamirpur in 1989, 1991, and 2007.

In an exclusive interview to Ajai Srivastava, senior journalist, at Chief Minister’s office in Shimla, Prof. Dhumal said that despite a grim financial crunch, he was determined to restart the development works which were stopped during the Congress regime. His thrust area would be power generation, eco-tourism, floriculture, herb culture and environment friendly industry. He has seen a dream also to make Himachal Pradesh an education hub where thousands of students from other states and abroad would come for studies in the picturesque and peaceful atmosphere and they would become the real brand ambassador of the state. According to him, the government alone can not do all these things. “We would certainly involve the private sector to increase the pace of development,” he says. 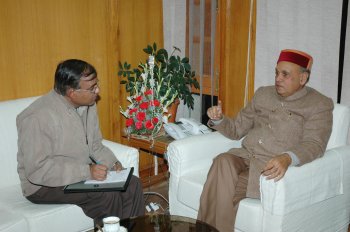 His priority “is to ensure justice to the common man, particularly the poor and downtrodden.”

Here are some excerpts of the interview:

Congratulations from HimVani for your grand success in elections. What is on your priority list?
Thank you. Well, I have adopted our election manifesto as the policy document for our government. Now we would work to implement it in letter and spirit. From my first day in office, you would see a change in atmosphere. My first decision was to increase the wages of daily workers from Rs 75 to Rs 100 and hike in social security pension of widow, disabled and old persons from Rs 200 to Rs 300 per month. There are a total 12,50,000 families in the state and the two decisions would give relief to about 6,00,000 families. These are some indications about our commitment to our people and the functioning of government.

What about your assurance to control price hike?
You know, this is a nation wide phenomenon and the government at Centre would have to take measures to tackle this problem. That was the reason we provided financial relief to the lowest class of the society by increasing the minimum wages.

But the state is under a severe financial crunch. How long would you be able to carry on these policies?
This is the people’s government and we have to fulfil the long standing aspirations of our people. But you rightly pointed out. The Congress government has left the loan burden of more than Rs 22,000 crore on the state exchequer. It is a serious situation. When I left the office in March, 2003, total loan on the state was Rs 11,293 crore. They doubled it in just five years. I had a meeting with the Prime Minister immediately after taking over and I requested him to release liberal grants to the state as it was done during the Atal Bihari Vajpayee government. He had assured me to provide the same. You know, Himachal is a small state with limited financial resources and it was the duty of the Centre government to help it out in continuing schemes for people’s welfare. But, I am sorry to say that the previous Congress government failed to plead for state’s interests before the Congress led government at the Centre.

Is it the only solution to the problem? What is your own road map to achieve the goal of economic development?
In the very first meeting of departmental secretaries, I have asked them to suggest new ideas to increase the revenue without putting burden on public and also to give suggestions for reducing the wasteful expenditure. They have been directed to submit quarterly reports to government. We will immediately consider the same and take prompt action. Apart from that, we would give a boost to hydel power generation sector which could give a new shape to the state’s economy. Simultaneously, we will focus on village tourism, eco-friendly industry, horticulture, floriculture and herb culture and the industry based on these products. It will not only strengthen our economy but also provide employment to the youth at their door step. You know, we have a very limited chunk of land suitable for agricultural crops. Therefore, it is a must to shift from traditional crops to cash crops. Food processing units in villages with marketing facilities of the products would decrease the migration from rural areas to urban areas. We would encourage the industries which do not harm the fragile ecological balance of our hill state.

Would you issue a white paper on the financial state of the government?
We have started to collect the data and would definitely make it public when the time comes. You may call it a white paper. It is the right of the people to know about the situation prevailing in the state.

But in the present circumstances, how would you manage to create necessary infrastructure?
It is not possible for the government only to do all these things. We would certainly invite private sector for mutual benefits. In my previous regime also, we had started in that direction. But the successive Congress government did not proceed on the road map prepared by us. Himachal is a peaceful state with good environment, surplus power and simple people. Moreover, we will ensure a system free from corruption. These things are necessary to attract investments in the state. I am sure, with our sincere efforts, we would be able to create an atmosphere which is conducive for establishing the industry. Not only this, I want to transform this state in an education hub of the country.

What is the idea behind it?
We have a very pleasant climate and picturesque surroundings. The peaceful environment of the hills could attract many prestigious educational organisations of the country and abroad to establish their world class institutions in the state. The idea is to provide ample opportunities to them so that the state could be developed as an educational hub and the students from different states and abroad would have an ideal place to stay and study. These students could become the brand ambassador of Himachal Pradesh because they would like to reciprocate the love and affection they receive from the people of Himachal.

It is said that there are nearly 15 lakh unemployed youth in the state. What is in your mind to tackle this problem?
We would start recruitment in the government and semi-government sector and fill 50 per cent posts batch wise. The rest would be filled through open competition. We shall ensure minimum 70 per cent jobs to Himachalis in the industry. I have already told you that we would encourage village based industries so that ample opportunities of employment could be generated. We are planning to encourage the industry to establish technical institutions with the courses as per their need and requirement of trained manpower. For example, an institution to prepare skilled manpower for hydel power projects would be established. Local youth being main beneficiary of these institutions would also get jobs in the related industry or project. Thus, we would be able to manage the problem of unemployment in years to come.

In your last tenure, you had focused on the development of roads, schools, and hospitals. Now what would be your agenda for these sectors?
You very rightly said. But during the previous Congress regime they did not pay proper attention on the development of roads and in increasing infrastructure and facilities in education and health institutions. We would definitely make it a point to improve the condition. One more thing we want to add in the process of development of the state is to construct underground tunnels without harming the ecology and environment. It would reduce not only the physical distances but also the emotional ones. This will save transportation expenses and valuable time.

Corruption was a core issue in BJP’s election campaign.. Would you enquire the charges levelled by your party leaders against Mr Virbhadra Singh, previous Chief Minister, and others?
Definitely yes. I want to clear that we have zero tolerance for corruption. But at the same time there would never be witch-hunting.