Shimla: Kinkari Devi (75), the bare footed, illiterate environmentalist has passed away. She spent her whole life in conserving the environment of the Himalayan region in Himachal Pradesh and fighting with mining mafia to protect the environment of the region from ruining. She took her last breath in her village Sangrah; district Sirmour at 11:30 AM on December 30. 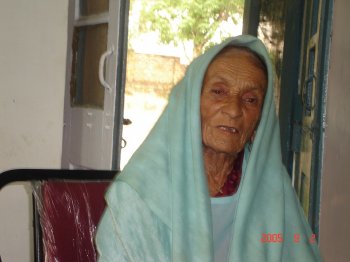 Kinkari Devi at her home in Sangrah (File Photo By: DD Sharma)

It is remarkable that the scheduled caste women from a below the poverty line family from a remote village of Himachal Pradesh, Kinkari had the honour to inaugurate the 4th World Conference on Women in Beijing along with Hillary Clinton, the then first lady of US. Kinkari Devi fought a long battle to save the fragile ecology of the Himalayas. She was conferred Rani Jhansi Stri Shakti award by the Government of India in 1999 for her invaluable contribution to protect the environment of the region. The award was presented by the then Prime Minister of India, Atal Bihari Vajpayee. She became the mother of a son in her teens and became a widow at the age of 16. She worked a as sweeperess in the area for her survival. The government of Himachal Pradesh neither gave any financial support nor recognition or honour for her marvelous contribution to the hills of this state.

The eco worker was a great visionary and made efforts for girl child literacy in the most backward district. She initiated the demand to start a degree college in her village Sangrah. Her demand was conceded two years ago by the government. She was of an opinion that without providing education to girls, no society or country can prosper.

Some social activists and NGOs helped her out during her last phase of life. They managed to mobilise resources for her treatment in Nahan and PGI, Chandigarh. It is pertinent to mention that the government of Himachal Pradesh didn’t extend any financial support for her treatment. It is notable that the absence of the great green campaigner would be felt by not only the natives of Sangrah but also by whole of the northern region. Her demise has shocked one and all who believed in her slogan, “Jal, jungle, pahar ko bachao” (Save water, forests and hills).

DD Sharma, for HimVani, had earlier this year, done an interview of Kinkari Devi, where she had urged the government to ban Poly-bags completely.