Shimla: The Himachal Pradesh state wildlife department is ready with its first ever poster campaign, to generate awareness about Snow Leopard (barfaani tenduaa), Western Tragopan (locally known as jujurana) and Pink Rhododendron (gulaabi buraas), which were recently declared as state animal, bird and flower, respectively. Earlier, Monal was the state bird and Musk Deer was the state animal. 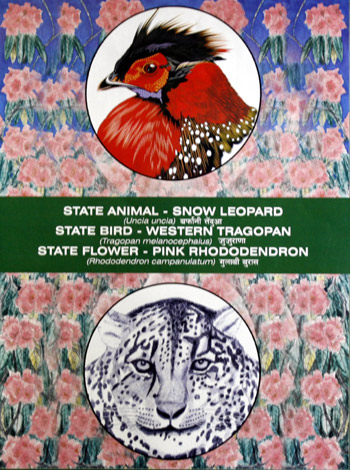 The poster features the Leopard and Rhododendron painted by noted Shimla based environmentalist B S Malhans. Meanwhile, the Tragopan is an artwork of an American artist, who contributed his piece for use as emblem of the Great Himalayan National Park.

The conservation project of the Tragopan is underway at Sarahan is first ever in the world to have seen captive breeding of the Western Tragopan this year after more than a decade of efforts. Estimates put the number of Snow Leapords in the state at 400. Himachal is close to getting a central project for conservation of the Snow Leopard, which has already been implemented in other four Himalayan states of Uttarakhand, Jammu and Kashmir (Laddkah), Sikkim and Arunachal Pradesh.