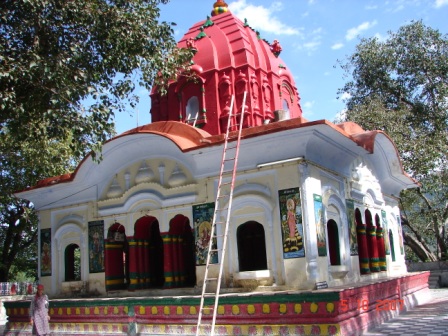 Situated high atop the Taarna Hill, Mandi, is the famous Taarna Temple. Situated among dense trees, the temple is picturesque and breath catching. It seems as if Maa Taarna keeps a vigil over whole of the Mandi town as almost all parts of the town beneath can be seen from this hill top. There are two ways to reach the temple – the stairs and the motorable road that leads to it. We preferred to take the road and what a road it was. Steep and with blind curves! I was feeling tired but a look downwards at the town would fill me up with vigour to move still higher and higher. And finally I saw it – a small temple amidst trees. It was late evening and the temple looked bewitching. My heart was filled with devotion and piety little knowing that once I enter the temple, my heart would overspill with devotion and piety!

When we entered the temple, the priest was preparing for the evening Puja and the serene and tranquil surroundings and the chanting of the mantras before the idol of Maa Taarna made our hearts bow and souls free of all ill thoughts. The image of Maa is made up of black stone and the Kaali image with gold Tikka and nose ring and with the red tongue protruding out would fill the hearts of the wrong-doers with awe and fear. The Pujari was immersed in chanting mantras and we, too, stood bewitched. All the factors, combined together, made me mesmerised and I literally forgot all that I sought to be bestowed with. The Puja over, and we did the Parikrama and saw the paintings of all the ten Devis in their full glory. I prayed to each of them – prayed really hard to help me fight my battle against the injustice and unfair play. And the ferocious yes bewitching idol of Maa Kaali seemed to bestow all that I had come to seek for. I could not take any pictures of the temple as there was a notice prohibiting for the same and taking pictures from outside was not possible as my camera had very low battery.

But it is true that if you desire something really hard, you get it. The next day, while I was roaming on the roads of Mandi, I met an acquaintance who was on his way to Taarna Maa and he invited me to come along. What more could I have asked for? I went to the temple once again and came back more than rewarded. I felt that Maa was extra generous on me that she provided me with an opportunity to pay obeisance at her temple twice in a short duration of some hours! I took some pictures, though from outside the temple and collected some information about the temple as well.

It is said that Shyam Sen, the King of Mandi who reigned from 1664 AD to 1679 AD got this temple constructed. This temple was known as Kaali Temple but gradually people started to call it Taarna Maa temple based on the name of the hill it is situated on. There is another folklore about the temple and according to this, King Balbir Sen of Mandi was imprisoned by Raja Ranjit Singh when the former refused to levy more taxes on his people and the king was very distressed. He used to pray regularly to his Kul-Devi Shyama Maa and one day the Devi appeared before him in the form of a small girl. The king took a vow to have a temple constructed when he would return to Mandi. And it is said that he came straight to the temple and started the work of re-decorating the temple.

The decoration of the inner sanctorum of the temple where the idol of Kaali Maa is positioned, is unparalleled. It is said that nowhere in the country one can find such intricate ornamentation done in gold as one finds on the walls of this temple. The gold work seemed so shining that I could not believe it to be so old. It is because there were hanging cotton balls from the ceiling of the temple which absorb all the dust and smoke from the incenses lighted in the temple. These cotton balls are regularly changed to keep the gold ornamentation work fresh and shining. So much for ingenuity!

The idol of Maa Kaali is three-faced and there is another idol that depicts the Mahishsurmardini form of Maa Kaali. The demon killing Devi that helps to keep the mother earth a safe place for us to dwell in.

The park outside the temple has a small canteen where we had a hot cup of tea and then planned to come down the stairs. The stairs led us to the centre of the market and honestly speaking, it was difficult to believe that a while ago we were so much away from the maddening crowds. The all patronising Kaali Maa seemed to smile benevolently at all of us, especially me. As I had gone with a special prayer in my heart to bring back peace in my heart, mind and soul by destroying all the evil that surrounded me, and I had a feeling that Maa had listened to my prayer.