Mandi (Feb 20): The Regional Hospital in the second largest town of the state has been ailing for lack of adequate staff, space, medicines and a lot other basis facilities, thus exposing tall claims of the state government regarding improved health facilities. For over the past 10 days, operation theatre work in the hospital has come to a grinding halt. Dozens of patients could not be operated upon last week. They were left with no other alternative except to go to private hospitals under compulsion, bearing unaffordable heavy expenses.

Of the 45 sanctioned posts of medical officers, only 28 doctors are there in the 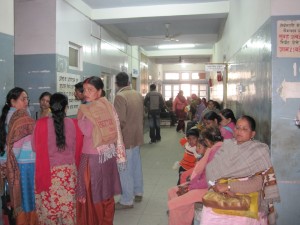 hospital. Of them many are deputed on miscellaneous assignments and some have to attend courts for police evidence. There is abnormal rush in the outdoor wing of the hospital where over 900 patients come daily. It is an uphill task for the doctors on duty to do justice to the patients. What adds to their woes is that most of the free medicines allowed for the poor are not available in the hospital and they are forced to purchase medicine from the market. Only two physiotherapists in the crowded hospital were attending to heavy rush of patients. Of them one has been shifted last week, making matters worse.

Delay in operations is being attributed to a minor fault in some machine, due to which the anesthesia wing has not been working. Het Singh, a private employee, drawing Rs 4,000 as salary, told this reporter that his wife’s arm had suffered multiple fractures when she fell from a tree and was rushed to the Regional Hospital, but her operation could not be done. After languishing in the ortho ward for a week, she had to be operated upon in a private nursing home.

The ortho specialists, when contacted, said he had been trying his best to conduct operations, but the doctor who had to administer anesthesia expressed his inability to do his job for some technical reasons. With moist eyes Het Singh said he had gone under debt by paying Rs 20,000 fee to a private hospital besides incurring other expenses. This is one of many such cases pouring in daily.

Kishan Chand, a resident of village Gokhra, bemoans that poor patients are left to the mercy of private hospitals where they charge exorbitant fee, much beyond their paying capacity. An easy ECG of a heart patient could not be done as the post of a lone technician was lying vacant since long, he laments.

Senior medical superintendent Dharamvir Rana, when contacted, said the government had been informed time and again about the existing vacancies. He said efforts were being made to fill all the vacant posts. It was officially disclosed that the lone posts of chief pharmacist, nursing sister, TB social worker, X-ray assistant, dental attendant, chief laboratory technician, ANM and nine class IV posts were lying vacant.

Patients from Kullu, Lahaul & Spiti are also referred to this Zonal Hospital and therefore various wards in this 300-bed hospital remain packed and patients are even forced to sleep on the floors of the wards. President of Nagar Parishad, Sushila Sonkhla, said that the government which claims to have accorded top priority to ‘Sadak, Swasthya and Shiksha’ (roads, health and education) should do something about the plight of the Regional Hospital.

Medical officers working in the hospital have their own woes to tell. They complain of inadequate residential accommodations. Most of the doctors are forced to pay heavy rent in the absence of required official accommodation. They lament that the residential houses of CMO and other medical officers in the premises of the hospital are in a shabby and dilapidated condition for want of proper repair and renovation.