Shimla: They virtually created a history and brought laurels for Himachal Pradesh. The pathetic conditions of their school could not stop them in reaching the heights. The students of School for the Blind, Dhalli, Shimla, not only won 11 gold, seven silver and one bronze medal in the boys’ events of 4th National Athletics Championship for the Blind held at Ludhiana, but also broke national records in many events. Anil Sharma of their team was declared best athlete of the championship. Society for Disability and Rehabilitation Studies (SDRS), HP Chapter will honour these little achievers on World Disability Day on coming December 3, by giving them cash prizes and citation. 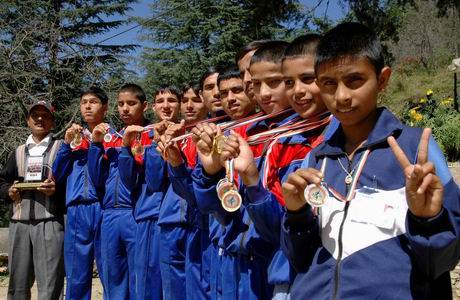 The Championship was held from September 30 to October 2, 2007 at Ludhiana under the aegis of Punjab Association for the Blind. Visually impaired athletes from 19 states and UTs took part in the meet. A ten member strong contingent of Himachal Pradesh participated in the championship. All these athletes belong to the School for the Blind, Dhali, Shimla.Deep Ram Sharma, coach of the team, was honoured with a special memento by the Punjab State Association for the Blind.

According to Ajai Srivastava, Chairman of HP Chapter of SDRS, this is the first time in the history of disability of this hill state that such a great achievement has been made by the visually impaired boys. He said, “Now we have decided that our society will honour these achievers on world disability day on 3rd December, 2007. We will also provide them sports kits, shoes, track suits and other necessary items so that could do much better in future.

It is pertinent to mention that these students are from below poverty line families and belong to very backward and far-flung areas of the state. They do not have proper facilities for sports activities in the residential school. Anil Sharma, best declared athlete, said, “We are fortunate to have good coach like Deep Ram Sharma. Due to his hard work only, we could make a mark at the national level.”