New Delhi (Feb 14): Mahabharata Jay Utsav started with traditional Thoda dance of Himachal Pradesh at the Indira Gandhi National Art Centre in New Delhi today. As many as 700 folk artists from all over the country, including 65 dancers of Shathi “the Kauravas” and Pashi “the pandavas” from Shillaghoond and Rajana villages of Shimla district, are participating in this month-long national festival. 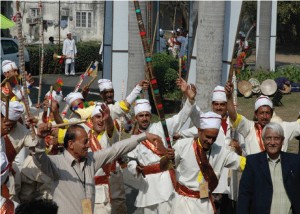 Dr Raman added that an exhibition of photographs of Pandav-related monuments and temples of Himachal Pradesh have also been set up in the festival. He said that this is for the first time when such a vast participation of traditional folk art of Himachal is being shown at the national level. “These folk arts and monuments of Himachal have become the centre of attraction for historians and cultural experts and research papers on Pandavkaleen traditional Thoda dance and Pandvayan singing are also being presented at national seminars in which over a hundred scholars and art experts from all over the country are participating.