Fashion — passion for some, need for others or just a reason to avoid faux pas for the rest. A multimillion dollar industry in itself, modelling, is just another profession to die for. With a successful modelling career come glamour, popularity and money, which would definitely be the turn-on for millions of modelling aspirants that we have in our country.

But what is the scope of commercial modelling in our own Himachal Pradesh? 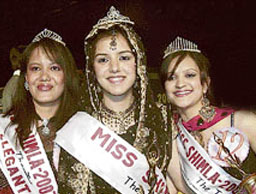 Boasting of some big silver screen names like Preity Zinta, Anupam Kher, Pankaj Kapoor and more recently of Rubina Dilaik (Choti Bahu) and Priya Chauhan (Tele shopping), models from Shimla have never made it big on the national circuit. What might be the reason for this inability?

The normal procedure to become a model is that you have to create your own portfolio (which consists of a photoshoot form a decent photographer), then forward it to different modelling agencies. In case you are lucky you get noticed by the right people at the right times, otherwise your dream to make it big may be only limited to local fashion shows and brand promotion. The normal procedure can take years for an aspirant to achieve some celebrity status, in the other case you just need to be extremely lucky and have some good contacts with influential people.

Good looks and a good body are not the most important things when it comes to becoming a successful model. I am not saying that these things do not matter, but you also need proper grooming to become successful. And we all know that an uncut diamond does not possess the value of a polished stone.

Then is it that girls/guys from Himachal possess inadequacies, which hinder their success, as compared to the neighbouring state of Punjab, who have done reasonably well in this field? When it comes to looks, I don’t think good looks or great genes, is the reason. When the same question was asked to ex-Miss Shimla and emerging actor, Priya Chauhan, she retorted back by saying: “There are various deterrents such as lack of exposure, correct sources, guidance, etc which delay the onset of success for a while for people hailing from Himachal”. She also said “it’s a very insecure platform where success isn’t always guaranteed. The risk part always outweighs an aspirant and one loses the confidence of taking a chance even when he/she is full of talent. No offence meant, but only a handful of families would permit their kids to venture out and live their dreams especially girls.”

The major reason for lack of success stories is that there is no modelling school in all of Himachal. We do have talent, but that is of no use unless, the talented ones are shown the correct path. In the same context it can be said that popular modelling agencies have not realized the talent portal of our state, nor has the government done enough to invite such agencies.