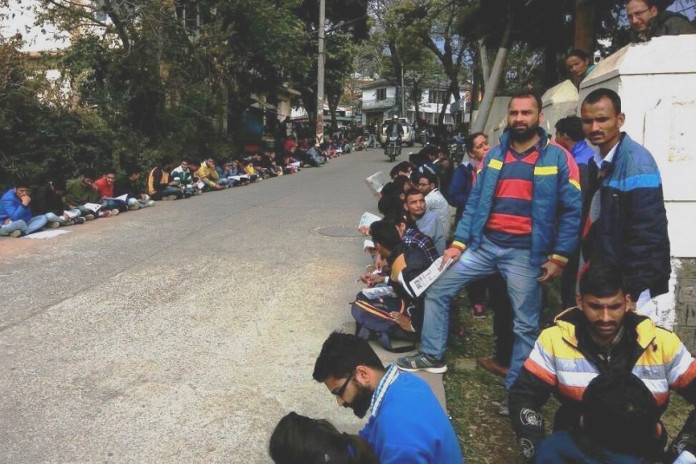 Students studied on the road to protest against the bad condition of Dharamshala library
Notice: Undefined variable: url in /home/nfjueazn/public_html/wp-content/themes/Newspaper-child/loop-single.php on line 55

The district library in Dharamshala which is 100 yards away from the offices of the Divisional Commissioner and Deputy Commissioner in Dharamshala has come in to limelight when the students of the local postgraduate college and the senior secondary schools decided to highlight the issue of abysmal conditions of libraries by studying on the road outside the Government district library in the city on Thursday.

The students and the residents of the city lodged the complaints of the lack of basic amenities in the library many times with the Education Department and the district authorities but when nobody listened to it, the students adopted the other way when the entire Government was in the city for the Winter Session of the HP assembly, which ended today. They also wrote to PMO.

The unique protest on Thursday saw several students sitting in rows on the pavement leading to the library. During their silent protest, young readers were seen reading their favourite books and magazines under the open sky. The teenagers allege that the library, the main one in the entire city, is bereft of basic facilities like seating arrangements and toilets. This is the new library building built about 5/6 years back. The upper storey of the building was said to be being utilised by some other Government department.

During the British rule, a district library was built in the city near the main commercial centre Kotwali Bazar, but the same was demolished by the Government in the start of this century to give way for a parking place to the growing rush of vehicles in the city. And the many rare and precious books were dumped for years in godowns of government building till this small space building was erected near DC office Dharamshala where few of them are reported to be destroyed too.