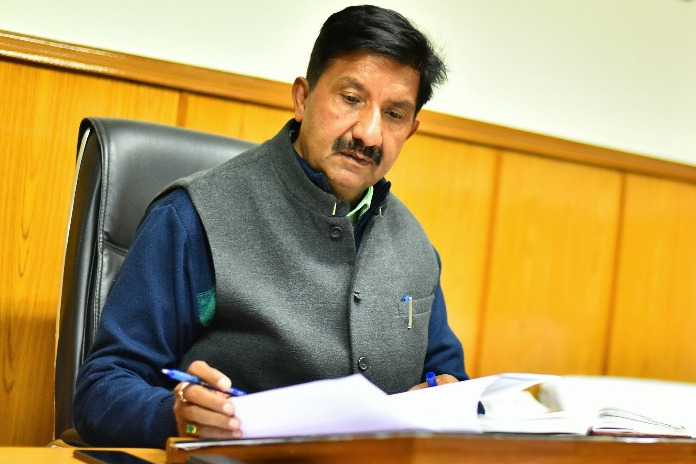 Congress legislative party leader Mukesh Agnihotri today said that Jai Ram Thakur’s BJP Government should act against the mine mafia with the heavy hand rather than accusing last Congress rule of such issues. Mukesh Agnihotri who initiated the discussion on the motion of ” thanks on Governor address” brought by the BJP member Mr Rakesh Pathania (Nurpur) and supported by Col Inder Singh in the assembly today said that Mr Thakur elected for the Chief Minister Office is unprecedented political incident in the history of this State.

Commenting upon the last 15 days of Mr Thakur in the CMO, CLP leader responded that he should function according the people’s expectation from his own wisdom rather being remotely controlled by someone else. Cautioning the CM for massive interference by the RSS in his government he advised that wrong perception is building up from the right day one that despite Mr Jai Ram Thakur being on the driver seat someone behind him is changing the gears of his car. Terming the massive reshuffles during the Assembly session in the State unprecedented, Opposition leader suggested that he should refrain from such practice. Four cabinet meetings were convened however no major decision was taken by the Government which shows that it was yet to move ahead with its election promises.

Terming the Jai Ram Thakur election as Chief Minister as an unusual decision of BJP, he added that BJP government could not undermine election promise made by the Mr Dhumal in public rally, however, nothing was reflected in the Governor Address. He said that promise had been made during the election meeting by Mr Dhumal to give 4-9-14 scale to youth, providing employment to youths, restoring the industrial package etc but they did not figure in the speech of governor address. Terming the forming of the new government very small period he said that it was possible for the government to prepare the draft of governor address in haste but it should also deliver on the issue promised by Mr Dhumal too.

Mukesh Agnihotri said that last Congress rule provided employment allowance and skill development scheme benefited around 1.50 lakh youth rather doing away with such scheme to cater employment avenues to more than 12.50 lakh unemployed youth in the state. He said that there are two routes before the new Government as it could choose constructive public welfare and development path helping the poor or pursuing the 2nd option of looking back, blaming last government, putting state agency after political rivals and path of exploitation, which would yield nothing.