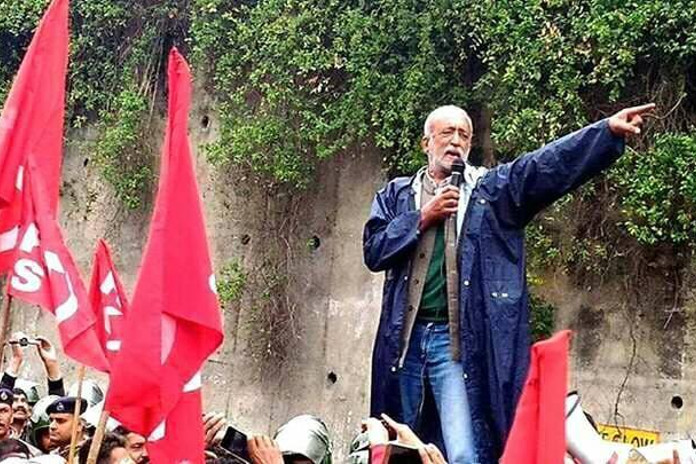 CPI(M) voice which remained absent in the HP state legislative assembly to be heard for more than 25 years made its presence as party two time MLAs and member of the Assembly from Theog, Rakesh Singha gave an impressive speech on the discussion of ‘Thanks Motion’ to Governor address. Mr Singha spoke for 15 minutes raising burning issues concerned to the commoner, farmers and working class forcing the members of both sides and audience gallery to hear him keenly.

The firebrand leader began his short speech hailing the former Chief Minister Dr YS. Parmar who is the founder of this hill state and touched most burning issues of eviction of small and marginal farmers, Gudiya Gang Rape in the House this afternoon. Blaming previous Congress for creating the confusing situation, he highlighted the eviction of small farmers even having encroachment of four Biswa and said that farming crisis is in the alarming stage as no serious efforts have been done in the past to regularise such encroachments.

He said that he is speaking after the gap of 25 years in this House but he was chosen to not for the power but to sit in the opposition and issues related to the common man for which he is bounded by the oath of the Constitution he took on Jan 9. Calling the members of both side to read the public mandate as farmers, workers and woman are forced to discriminate and in distress, he said that most of the public representatives rarely pay any heed to such burning issues.

He said that Mr Jai Ram Thakur should have sacked the Director General of Police Mr Somesh Goel as he kept the entire State in dark after telling the white lie about the Gudiya case. Hailing the Governor address over the reducing the age limit of social security pension Mr Singha said that Governor address seemed to be drafted in the haste as it did not figure many issues of such pensioners as they were deprived of this benefits due to the wrong implementation of this scheme for months.

Mr Singha warned that since members of state legislative assembly failed to perform their duty judiciary is encroaching upon the mandate of legislation. ”I equally respect the judiciary and not blame it for the present state of affairs since the legislators themselves are not serious about their mandate to make legislation for addressing public issues. The Court is passing the order due to want of proper legislation, he said that government was evicting the small fray who were forced to end their lives as they have no other alternative.

He said that State Government should address the issue of eviction of small farmers as it would snatch their livelihood as the state is already facing the menace of unemployment. He said that no one is ready to hear the cry of working class who is building so many power project on their back despite government favour the big contractors and power producers. He hailed the election Jai Ram Thakur as the leader of house and CLP leader Mukesh Agnihotri and hoped that both of them would shoulder the responsibility came on them with the new public mandate.