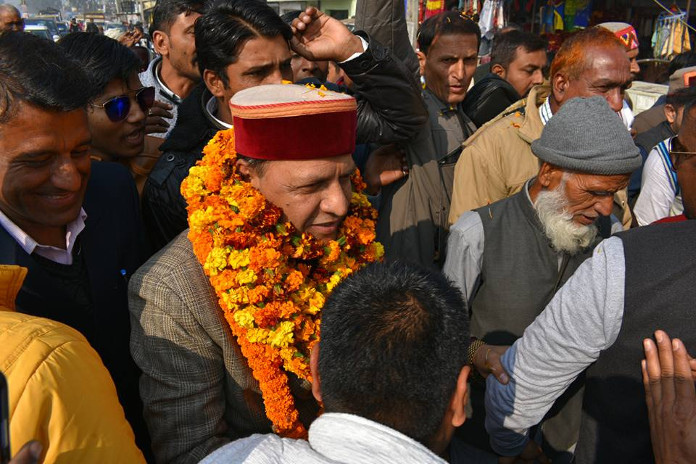 BJP MLA from Nahan constituency Dr Rajeev Bindal was unanimously elected speaker of the 13 Assembly of Himachal today at Tapovan Dharamshala. Dr Bindal submitted his papers yesterday as the lone candidate for this seat. The Protem Speaker of the Himachal Assembly Ramesh Dhawala announced Bindal’s selection this morning. CM Jai Ram Thakur and the leader of the opposition Mukesh Agnihotri escorted the newly elected Speaker Dr Rajiv Bindal to the Chair.

62-year-old Rajeev Bindal is an Indian politician and member of the Bharatiya Janata Party. Bindal was a minister of Health and Family welfare in last BJP Government of Himachal Pradesh, lead by PK Dhumal. Bindal is the son of the late Vaid Balmukund Bindal; born on 12 January 1955 at Solan. He is a fifth term MLA, presently from Nahan. He represented Solan constituency in Vidhan Sabha three times consecutively from 2000 to 2012. He was Cabinet Minister for Health and Family welfare in Himachal Pradesh Government from 2007 to 2012.

Mr Bindal is a Doctor by profession. Bindal started social service right from his college days. After graduation, he went to tribal areas of Bihar to serve as a doctor for three years. He established Himgiri Kalyan Ashram at Solan, a charitable institution where poor children are provided boarding and education free of cost.

Bindal has held the office of Chairperson of Municipal Committee of Solan from 1995-2000. He was elected MLA in 2000 and became the Chairman of HP State Pollution Control Board. He was re-elected as MLA in 2003 and 2007 from Solan. He joined the state cabinet as Minister for Health & Family Welfare from 2007 – 2012. After the Solan constituency got reserved, he contested elections from Nahan in Sirmaur distrcit and got elected consecutively in 2012 and 2017.

The sources say that only Hans Raj BJP is filing the nomination papers for Dy speakers post and Congress has agreed on his name. If all goes right Hans Raj shall be elected Dy Speaker unopposed tomorrow. Hans Raj has elected 2nd time from Churah of Chamba district.