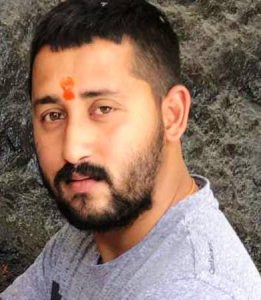 According to the police, Major Shikhar Thapa of 8 Rashtriya Rifles, posted at Buchar post in Uri sector, was allegedly shot when he berated by Naik Kathiresan G for using his mobile phone on duty in a sensitive area. The Major was shot dead late last night  allegedly by a Jawan after a dispute at a post near Line of Control in Jammu and Kashmir.

When the phone was snatched from him, the jawan allegedly shot 29 years old  Major Thapa five times, killing him instantly. Mr R S Rana  a spokes person of the Gorkha Community said here that  the officer was commissioned into the folds of Shatrunash faternity on 10 Dec 2011. He was an avid sportsman, extremely jovial and an active member of Team 71. He was posted to 8RR Bn on 27 Sep 2015.

He hails from Dharamshala and is son of Mr Arvinder Kumar Thapa. He got married to Mrs. Suvidha Thapa on 24 July 15. The officer leaves behind him his son master Suvir Thapa who was born on 09 Apr 2017.