The official film poster and trailer was launched by the director and producer of the film Ajay Saklani, co-producer Shivani Saklani and the team of Saanjh including lead actors Aditi Charka, Vishal Parpagga, Amit Patiyal and Dhirendra Rawat. Saanjh is the first commercial feature film to be produced in Himachal Pradesh. A dream project for director and producer Ajay Saklani, who hails from District Mandi, the film has been screened at several American film festivals, as well as been awarded the Himachal Excellence Award 2016 by Divya Himachal. The film is scheduled to release on 14th April, 2017.

The film Saanjh concerns a young city dweller, Sanju, who is forced to move in with her grandmother in a rural village following her implication in a social media scandal. There she slowly forms a friendship with her grandmother’s learning-disabled lodger. Shot in the Kullu Valley, Saanjh beautifully captures Himachal’s culture, language and stunning landscapes. The film’s main theme is the hardship faced by aging parents who are left behind when their children migrate from villages to big cities. It also asks how inter- generational relationships might be rebuilt.

The purpose of this interaction is to support Saanjh at the state and national level which has already made its mark at international level by bagging Best Feature at the Borrego Springs Film Festival 2017, and Award of Merit at the Accolade Global Film Competition—both in California, USA. 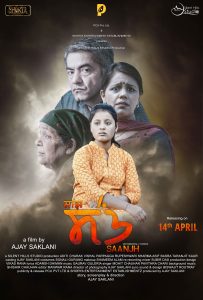 The poster and the trailer link attached – https://youtu.be/iNhHxP_4hv4