During the interaction Mr. Singh expressed his gratitude for the work that Waste Warriors has been doing in the field of waste management and pledged his full support. Talking to Himvani, Jodie Underhill said that she started the weekly waste collection from Triund back in 2009 but due to a 1000 per cent increase in the number of tourists the garbage is becoming increasingly difficult to manage and the costs have inevitably increased.

An update was posted on the Chief Ministers Facebook page soon after the meeting stating “Met the renowned ‘ Garbage Girl’ Jodie Underhill founder of Waste Warriors at Dharamshala circuit house this morning. I have been told that her organization has been maintaining the cleanliness on the famous Triund trek route. Jodie told me that Waste Warriors – Dharamshala is planning to shut down their operations due to lack of funds. Promised her all possible help and directed the officials to immediately release some funds for the organization.” Mr Singh said on his facebook wall.

A funding proposal was immediately passed onto Mr. Chander Prakash Verma, Deputy Commissioner with instructions to give whatever help was required. The aim is for tourists to bring their waste back down from the mountain camp in re-usable garbage bags and deposit the waste at a recycling and waste drop off point at Galu. Punjab National Bank has covered the capital costs of the project to the sum of 2.2 lakh.

Waste Warriors has already collected and processed over 4223 tonnes of waste from Bhagsunag and Triund since they registered in 2012. The NGO which also has projects in Dehradun and around Corbett Tiger Reserve has been running at a financial loss with the Dharamshala project due to a lack of funds and local support. The NGO recently launched a crowd funding campaign in a final bid to save the project as a decision was made by management to close the project down. 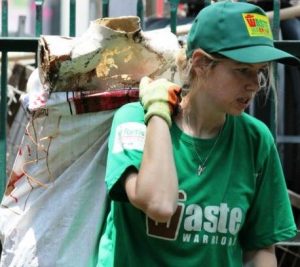 Waste Warriors runs a door-to-door collection and maintains the cleanliness of public places in Bhagsunag. They have installed and maintain dustbins, do educational and awareness raising activities and conduct weekly clean-up drives to Bhagsu Waterfall in addition to the Triund waste collection and hike. Jodie said “We feel blessed that we got the opportunity to meet with the Chief Minister and are delighted that he is so supportive of our efforts. We were also able to meet with the Deputy Commissioner and he was also very appreciative of our work.”

Funding has been an ongoing issue for us as an organisation and the Government support is essential for projects like these to succeed. Gokul Butail has been a huge help in helping us to meet the right people and we are extremely grateful to him for his assistance. We would like to thank PNB and each and every person that has donated to save the Dharamshala project, Waste worrier said.