It is nice to be concerned about the environment. Whatever nature has given us must be treated with care, and the we must do all we can to safeguard the balance of natural forces.

However, one has to say that these kinds of reports would be a lot more convincing if there was good science and hard data behind them. Any such anecdotal observations in nature need to be tempered with the recognition that within broad period averages, there are many natural cycles. Any blanket acceptance or rejection of concepts like global warming without hard evidence is not helping the cause of caring for the environment.

For example, it is stated that since the last few years, Rohtang is opened to traffic earlier than it used to be. But the author ignores the fact that the army has much better snow clearing equipment in the last few years..!

Indeed, if this year it has snowed less in the Himalayas than average, then in the previous year, it has snowed a lot more-more than in the last 20 years, I am told. This year, all the power projects of HP are generating very high amount of electricity, since the snow melt is higher, due to the high amount of snow last year. The same thing also happened last year.

Someone states that the temp. at Rohtang has increased by 1 degree in the last 30 years. This bland statement hides the fact that the year to year variations in temperature are much more than a degree. We simply do not have reliable data of a longer period to know whether this one degree shift observed over 30 years, is due to a generalized warming or part of a natural cycle with a slow frequency.

Climate cycles have varying frequencies-at some level, climate is known to cycle over thousands of years, at another level, over centuries, and at a further level, over decades. To really make definitive statements about any localized warming, one has to take into account the period in any of these cycles we may be in.

If indeed the traffic flow has doubled over the last 3 years, and it is this traffic that has caused the faster melting of glaciers, then there should be clear evidence that in the last 3 years, the temperature has gone up. But last year, being a longer than normal snowfall period in HP, and colder than usual summer, clearly presents a data point which is anamolous to this “warming due to increased traffic” theory. Hence this kind of hypothesis, uninformed by statistics, ought to be taken with a large pinch of salt.

Having said all this, I would still advocate putting in place measures which would, in a common sensical manner, reduce the risk of pollution on the Manali-Leh Route. Allowing only vehicles which match a particular emission standard, is a very good suggestion.

The moral of the whole story, at the risk of being repetitive, and the high risk of being severely flamed at, is that people who care about the environment cannot simply use data selectively, or randomly, to claim that human activity is damaging the environment in some kind of irreversible way, either locally or globally. It would help the cause of the environment better if such statements were made after careful reasoning, proper statistical analysis, and a healthy respect for the cyclical nature of weather patterns. 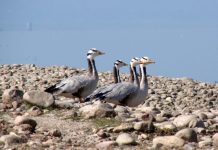